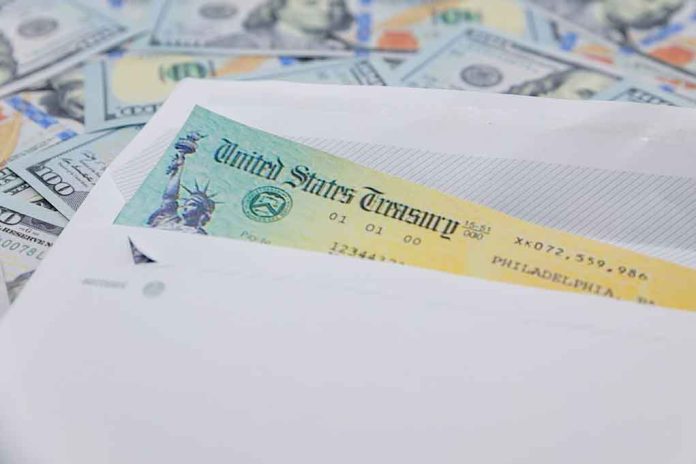 Fourth Stimulus Check For Americans? Here’s What To Expect

(UnitedHeadlines.com) – The IRS issued three economic impact payments, also called stimulus payments. The first, a $1200 payment, began in April 2020. The IRS issued a $600 allotment in December 2020 and January 2021, and taxpayers received $1400 starting in March 2021 as a third and final stimulus payment. Shortly after the third payment, inflation took hold of the economy and outpaced wage increases, causing many to question whether Congress might issue a fourth stimulus check this year.

Sadly, the answer is a clear “no” from Congress. Yet, that’s not stopping 11 states from contributing toward economic relief for their constituents to fight rising gas and grocery prices.

A list of 10 states appeared in a June 9 article by Forbes about states issuing tax relief and rebate checks, often due to budget surpluses. A June 24 article from Cal Matters detailed a California gas rebate program that Governor Gavin Newsom (D) and state legislators have negotiated. Details for all 11 states are listed below.

California: Up to $1050 per Family Gas Rebate

California politicians negotiated a graduated rebate based on income as follows:

If a household income is at or below $75,000 annually for individuals or $150,000 for couples filing jointly, each taxpayer will receive $350, and if they have at least one dependent, they will receive an additional $350. A two-parent family could see up to $1050, while a single parent would receive $700.

California has a $31 billion budget surplus. The gas rebate plan is forecast to cost $9.5 billion as part of an overall $12 billion relief plan.

Single taxpayers in Colorado can expect tax rebates of $750, while couples filing jointly will see a rebate of $1500 based on legislation Governor Jared Polis signed in May and numbers released in a statement on June 21. Every resident who filed 2021 taxes by June 30 can expect payment by September. Taxpayers who file by October 2022 via extension will receive their rebates in January 2023.

In May, the state began sending $300 relief rebate payments to residents based on their 2020 tax returns. Most residents who filed taxes should have received their payments by June. Couples who filed jointly should each have received a check ($600 per family). Residents with questions should check the Delaware Department of Finance’s website for answers or check on the status of their rebate.

After filing both 2020 and 2021 returns, taxpayers may receive rebates up to $250 for single filers, $375 for those filing as single heads of household, and $500 for married couples filing jointly. Historic budget surpluses allowed Governor Brian Kemp to authorize tax rebates and enact legislation. Even residents who only live in the state part of the year or those who owe arrears could see some money back. To find more answers or obtain more information, visit the Georgia Department of Revenue.

Hawaii: Up to $300 Constitutional Refund

This year, Idaho will issue more than 800,000 rebates worth about $350 million to residents. Governor Brad Little enacted legislation in February providing a $75 rebate or up to 12% of their state taxes, whichever is greater. Full-time residents who filed 2020 and 2021 tax returns and grocery-credit refund returns can expect a direct deposit into their accounts. For residents without direct deposit, the state will issue checks. Residents can monitor the status of their rebates.

Residents filing their 2021 taxes individually will receive a one-time $125 tax rebate based on a budget. Married couples filing jointly will receive a single rebate of $250. The state will issue funds via direct deposit. If direct deposit isn’t possible, the state will issue checks later this summer. For more information, residents can visit the Indiana Department of Revenue website.

Governor Janet Mills expects to send out more than 858,000 direct relief payments totaling more than $729 million to many of her citizens. Individuals making less than $100,000 or less than $150,000 as head of household are eligible to receive checks for $850. Couples filing jointly can make up to $200,000 and would receive a check totaling $1700.

Residents, even those who typically don’t file, have until October 31, 2022, to submit their 2021 taxes to qualify for the relief payments. The state will begin issuing payments in June. Maine also increased the amount it’s returning for 2021 to the state’s Earned Income Tax Credit recipients.

While Walz has negotiated fiercely for a sizable tax rebate for his citizens, GOP lawmakers would prefer to make tax cuts permanent. The state currently has a $7 billion surplus.

So, while residents won’t physically receive a check, they can look forward to tax rebates in 2023.

New Mexico: Up to $1500 Tax Rebates and Relief Payments

So, while Congress may not send out a fourth stimulus check, these 11 states are sharing the bounty. Are you in one of these generous states? Could your state be next?