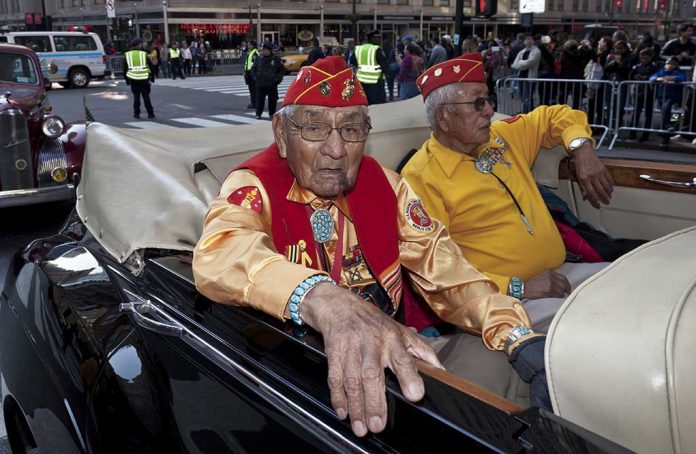 (UnitedHeadlines.com) – When World War II loomed on the immediate horizon, US military intelligence needed to make it as difficult as possible for the Axis powers to listen in to American radio transmissions. Computers that might securely scramble and unscramble communications were a long way off, but the United States Marine Corps (USMC) actively pursued a program started during World War I, and in 1942 the first class of the Navajo code talkers was born.

Hearing But Not Understanding

Every government involved in the war wanted to make it as difficult as possible for opposing forces to decode messages to prevent battle losses (and not incidentally, the loss of human lives). Still, they needed to transmit battle plans to corresponding units and allies. However, a cryptologist from the opposing side could reverse engineer even the most complex system derived from mathematical functions.

By contrast, the Native American languages were traditionally verbal languages which meant that few, if any, books existed to help someone translate them, and very few people outside the native tribes were fluent in them. Notable postings included Navajo and Hopi in the Pacific theater, the Comanche took on Germany in the battlefields of Europe, and the Meskwaki in North Africa.

Samuel Morse developed a method of sending messages across the telegraph that he had invented by creating an alphabet that uses a series of dots, dashes, and spaces, the most famous of which is “… – – –…” and is the international distress signal SOS. One method that they developed for the code talkers used a similar idea.

Most people are familiar, through TV shows and movies at least, with the phonetic code used by the military and police where “Charlie” stands for C and “Foxtrot” for F, but of course, something so straightforward would not fool anyone fluent in English. They would take the English word, translate it to their native language, and transmit it that way, and the receiver would reverse the process.

By their very nature, Native American languages don’t have direct translations for certain words. For example, “airplane” is not a concept the tribal ancestors would have been familiar with, so they would substitute an appropriate phrase, like “metal bird.”

Not only would any eavesdropper not have any idea what they were hearing, but even if by some strange chance they were familiar with it, they would still have to figure out what the phrase meant to the intended targets. Although we gave the airplane example above for simplicity’s sake, there were closely guarded books of pre-existing phrases for more complex ideas, like the atom bomb, for example.

The men who took these missions risked their lives just like any other soldier or sailor because they too had to be in the front of the battle. Yet, like so many things within the military complex, the whole program was classified until 1968, meaning they were literally unsung heroes. Today, however, they’ve been recognized for their service. Their stories have been told with biographies about them and their program, and even in media with the movies “Windtalkers” and “Navajo Code Talkers of World War II.”