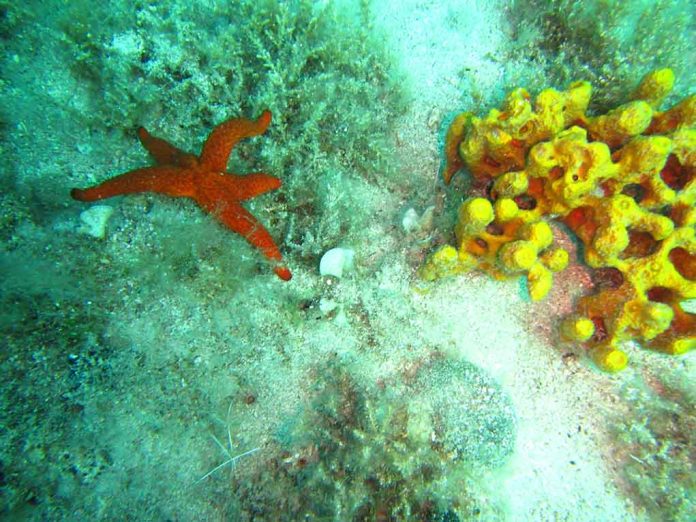 (UnitedHeadlines.com) – The world knows very little about what goes on beneath the surface of Earth’s oceans. Every now and then, researchers catch a glimpse of what life’s like under the waves. At one mile below sea level, existence is much different, and much stranger, than it is on the surface.

Recently, explorers caught a glimpse of something strikingly similar to the world of fantasy. While diving over a mile under the surface, expeditionists found a yellow sea sponge and a pink starfish on the ocean floor. Sound familiar? Well, it should. The hit television show “SpongeBob SquarePants” depicts a yellow sea sponge that’s best buds with a pink starfish named Patrick.

Oceanographers found the real-life SpongeBob SquarePants and Patrick Star hanging out together on a rock at the bottom of the Atlantic Ocean. pic.twitter.com/OE8mwhaWY5

While the pair may seem like nothing can separate them on TV, Christopher Mah, a scientist watching the live feed, noted that the real-life SpongeBob and Patrick are likely not friends at all. In reality, the two are actually at odds in the wild as starfish feed on sponges.

In all fairness, the pair do seem to perfectly resemble Patrick and SpongeBob (minus the clothes and faces). However, Mah believes that the sponge may be yellow due to its chemical defenses. The scientist did mention that the starfish in the video was likely the same species that inspired Patrick’s character.

While they may be mortal enemies in real-life, SpongeBob and Patrick will always be the best of friends on TV, even if they do have a falling out every once in a while. Perhaps, with the holiday season upon us, these real-life counterparts of the dynamic duo will follow in their fictional doppelganger’s footsteps and coexist peacefully.