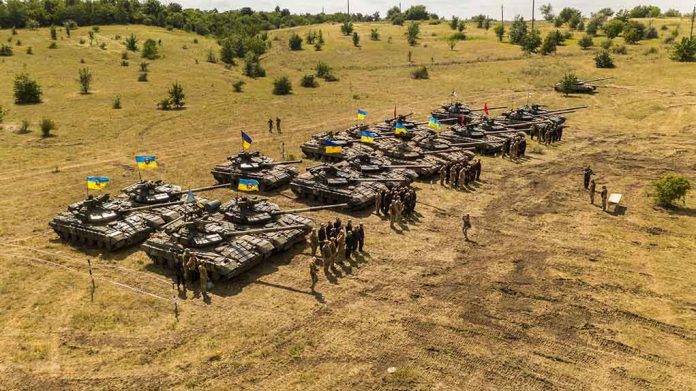 (UnitedHeadlines.com) – A new development in Ukraine has the world watching in fear as a full-scale war seems increasingly likely. Diplomacy is failing fast, and Russia is ready to abandon it altogether. As the situation escalates, it seems Moscow has set a trap for its outmatched foe.

In eastern Ukraine, separatists supporting the Russian Federation allege that Kyiv (the capital of Ukraine) has begun moving military equipment into the region. An anonymous representative for the Donetsk People’s Republic’s militia claims mine-destroying equipment, armored formations and multiple launch rocket systems are among the new arrivals.

Separatists in the Donbas region say Kyiv has built up military hardware as President Joe Biden seeks to present a united front against Russia. https://t.co/v3oN7kaHzg

Andriy Marochko, a spokesperson for the Luhansk People’s Republic militia, previously told a Russian news agency that Kyiv already placed howitzers and rocket systems along the contact line in the Donbas region. In December of last year, Russian President, Vladimir Putin, claimed Ukraine was committing genocide against the Russian-speaking people in that same area.

With new weapons of war moving in, Putin’s comments could be Russia’s excuse to send troops into the Kyiv-controlled regions of Luhansk and Donetsk. According to The Moscow Times, this deployment of troops is one way Russia can determine what a western response might look like, dictating what action it would take next.

Ukrainian officials insist that a Russian invasion is unlikely as Moscow doesn’t have enough troops in place for a full-scale offensive. Instead, they believe more cyber warfare will come as Russia bides its time waiting for the perfect time to strike.