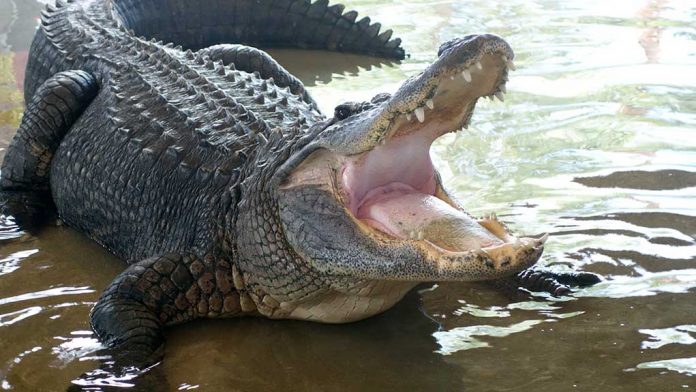 (UnitedHeadlines.com) – Alligators are incredibly unpredictable and dangerous to handle, even for experts who work with them on a daily basis. The scaly beasts possess a lightning-fast reaction time and powerful bite. They can seriously injure or even kill people who venture a little too close to them for comfort. That threat didn’t stop one Florida man from going out of his way to capture and relocate an alligator outside his home.

Philadelphia native Eugene Bozzi, who first moved to the Sunshine State about a year ago, says he never expected to actually capture one of the fierce predators. Still, he felt motivated to take action when a wandering gator entered his yard.

The quick-thinking resident went to work, attempting to trap the animal in a jury-rigged trash can. That was right about when he started to realize the alligator’s staggering strength.

Thankfully, Bozzi persevered, managing to secure the trash can as the alligator continued to thrash. The would-be superhero then wheeled the makeshift device to a nearby retention pond and set the animal free.

🐊Reminder: Alligators are not recyclable in your blue lid cart.

Bozzi admits he caught the animal of his own accord without permission — and notably, without being aware of proper procedure. He didn’t expect the act, or the video captured during the daring rescue, to garner so much attention.

Eugene Bozzi’s dangerous but successful rescue shouldn’t motivate other locals to attempt the same heroic quest to save wild animals. Instead, anyone concerned with nearby wildlife should contact their local conservation office and ask them to intervene.