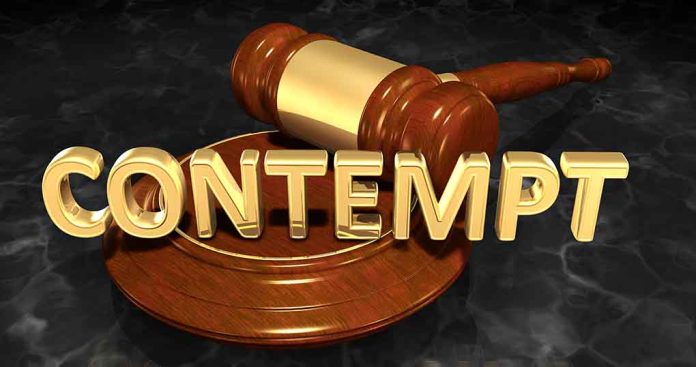 (UnitedHeadlines.com) – The House appears to be on the warpath in its quest to get to the bottom of the January 6 incident that saw Trump supporters storm the Capitol. Former Trump allies have been the target of the January 6 Committee’s wrath for months. The House has already charged Steve Bannon with contempt of Congress, and now they’re after a second person.

Mark Meadows, Trump’s former White House Chief of Staff, has found himself to be the committee’s next target after refusing to answer their subpoena. In retaliation, the January 6 Committee unanimously voted to hold Meadows in contempt of Congress and passed the recommendation on to the House.

222-208: House finds Mark Meadows, former President Trump's Chief of Staff, in contempt of Congress for refusing to comply with a subpoena from Jan. 6th Cmte investigating US Capitol attack and refer him to Justice Dept for prosecution. 2 Republicans Cheney & Kinzinger voted Yes. pic.twitter.com/1kwDkvFG3l

The House held its vote on December 14, which fell nearly along party lines with 222 members voting in favor and 208 opposing holding Meadows in contempt of Congress. All Democrats voted in favor, while two Republicans broke away from their colleagues to join the Democrats.

The decision will mark the first time since the 1830s that the House has voted to hold a former member in contempt of Congress. Meadows has been cooperative for the most part, providing most of the documentation the committee wanted.

Meadows asserted that the documents he withheld fall under the protection of executive privilege and that until the court tells him otherwise, he will protect Trump’s rights. The former chief of staff noted that the January 6 Committee requested him to waive the former president’s executive privilege, but he denied their request, explaining that it wasn’t his to toss out.

Did Meadows do the right thing, or was the House correct to hold him in contempt?