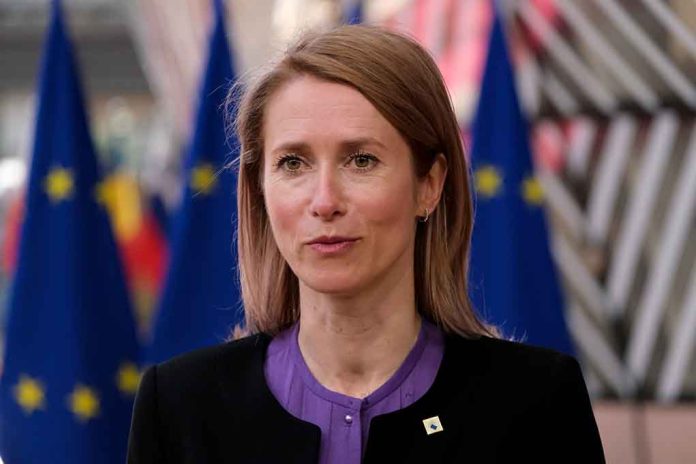 (UnitedHeadlines.com) – Tensions in Eastern Europe are high as Russia is amassing troops along its border with Ukraine. President Biden recently met with Russian President Vladimir Putin to discuss the situation. Unfortunately, the meeting only drew concerns from Eastern Europe that the United States may be open to Russia’s idea of halting the expansion of the North Atlantic Treaty Organization (NATO) near Russian territories. In response, the Estonian Prime Minister (PM) issued a grim warning to Western countries.

Kaja Kallas, the Estonian PM, raised the alarm just before crucial meetings between the European Union (EU) and NATO. PM Kallas asserted that Russia shouldn’t be able to use military pressure as a way to determine which countries can join NATO or the EU.

Vladimir Putin is “trying to present himself as a solution to this problem that he has created himself,” says Estonian PM Kaja Kallas.

The PM noted that President Putin is attempting to portray himself as a way to fix a problem that he caused, noting Russia’s military build-up along the Ukraine border. Russia also requested that NATO revoke a commitment it made in 2008, promising Ukraine and Georgia that they would become members of the organization. Kallas believes this to be a carefully constructed trap by Putin, and warns that Western countries shouldn’t fall for it.

Estonia’s head of foreign affairs committee, Marko Mihkelson, believes the whole situation looks a lot like the Munich Agreement of 1938, which Europe used in an attempt to avoid war with Adolf Hitler. Europe agreed to give the Nazi leader Sudetenland in western Czechoslovakia, yet it still ended up embroiled in the most famous war in human history.

Is Mihkelson right? Could Putin be attempting to start a third world war?