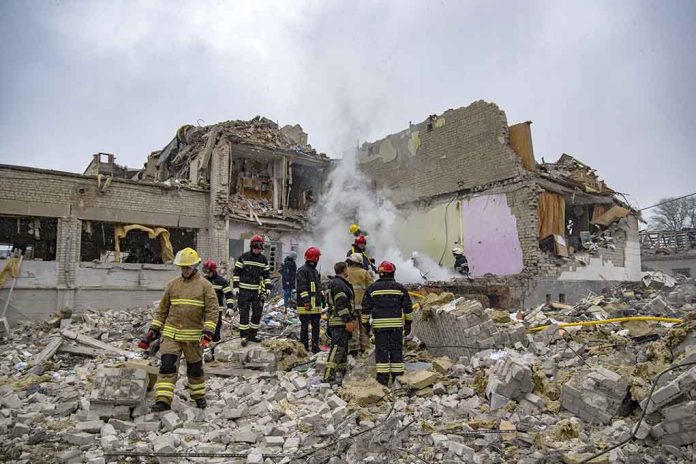 (UnitedHeadlines.com) – Russia’s invasion of Ukraine has dragged on for months. Russian forces have indiscriminately attacked hospitals, theaters, and apartment buildings. The death toll for non-combatant civilians in Ukraine continues to rise as Russia strikes non-military targets.

In the Ukrainian city of Chasiv Yar, authorities continue to pull survivors from the rubble of what used to be an apartment building. Russian forces destroyed the complex with a rocket attack, killing at least 30 people. Chasiv Yar wasn’t the only city hit that day. Kremlin forces also attacked Kharkiv to the north and injured 31 people.

Rescuers picked through the rubble of an apartment building in eastern Ukraine searching for two dozen people, including a child, feared trapped after a Russian rocket strike on the five-storey building killed 15 people https://t.co/AJqYsMWfxw pic.twitter.com/uklFBou8Rh

Media sources say Putin’s troops attacked Chasiv Yar to gain control of Donetsk in the Donbas region and hand it over to Russian-backed separatists. Russia has already overtaken Luhansk, the other half of the Donbas area.

The United Kingdom Ministry of Defense believes the recent attack failed to achieve “any major territorial advantages.” The ministry also noted that Russian forces are struggling with low morale because they aren’t receiving scheduled breaks from combat.

Find out more about the UK government's response: https://t.co/SnhtVoG5js

How long can Zelenskyy hold off Russia? How many more lives will preserving and protecting the small nation’s sovereignty cost?